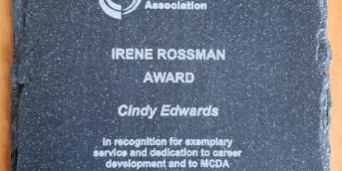 On April 14, the Minnesota Career Development Association (MCDA) announced that Cindy Edwards had received the Irene Rossman Award. This award recognizes an individual who has made a significant contribution to MCDA and/or the field of career development.

In her nomination, the MCDA notes that “Cindy has demonstrated an ongoing commitment to her own personal development and those of other career professionals in Minnesota. This year alone, she led the breakout committee for the 2019 Careers Conference, partnered with Vic Massaglia on presenting at the 2019 Fall Event [and] partnered with Annie Montemayor on re-launching MCDA webinars. These contributions were given with no thought to personal gain; just how she could support other professionals in their growth. This commitment to other career professionals has led her to serve on the MCDA Board in addition to her time on the MCDA Conference Committee and partnering on presentations for both State and National Career Development Conferences.”

Stay connected!
Get our latest news and blog posts – provide your info below and we’ll contact you only when we have something new to say.
Go to Top